Permalink
Gartner + Bloom is proud to announce that managing partner Kenneth Bloom will be speaking at the 2016 CLM National Construction Claims Conference.  The conference will be held in the Manchester Grand Hyatt in San Diego, California, September 28-30.
This September, the Claims and Litigation Management Alliance (CLM) will hold the most comprehensive construction claims conference ever. In addition to addressing construction defect claims, conference sessions will also address facets of construction-related claims including construction site accidents/injuries, coverage issues, subcontractor issues, and new technologies. Sessions also will address issues on the national, regional, and state levels.
About Ken: Ken Bloom is a founding partner of Gartner + Bloom, PC., an AV rated law firm in existence for twenty-two years and with offices in New York City and Springfield New Jersey. Ken is a skilled trial attorney, who concentrates his practice in the areas of Casualty/Liability Defense; Insurance Coverage; New York Labor Law (Scaffold Law); Construction Litigation including construction defect, EIFS, apparent microbial growth (AMG), asbestos and lead paint matters, as well as Insurance Fraud Defense and Commercial Litigation. Ken was admitted to the bar in the District of Columbia in 1981; New York 1982; Pennsylvania 1990; the U.S. District Court, Eastern and Southern District of New York in 1983; U.S. District Court, Northern District of New York in 1990; U.S. Supreme Court in 1985; U.S. District Court, Eastern District of Michigan in 1988; and the U.S. Court of Appeals, Second Circuit 1990.  He is a graduate of Cornell University (B.S., 1978), where he serves as a guest lecturer for the course, “Managing and Resolving Conflict.” He obtained his J.D. from American University in 1981.

Arbitrating Indemnity Issues During the Pendency of a Supreme Court Action, by Arthur Xanthos

Permalink
Our last article warned of a pitfall with the traditional arbitration clause - ‎an arbitrator may end up with a power (e.g., the power to award punitive damages) that was never intended by the parties. Here we highlight another arbitration issue that has arisen several times in our practice.

Assume an Owner (O) hires a General Contractor (GC) to do work on a construction site, and the standard AIA form contract is executed containing a mandatory arbitration clause providing that "all disputes between the parties arising out of this agreement shall be resolved by binding arbitration under then applicable commercial arbitration rules". Plaintiff-worker (P) trips and falls while working on the site and sues both O and GC, alleging ‎negligence, as well as violations of the New York State Labor Law (the "Lawsuit"). O and GC each answer the Lawsuit and assert cross-claims against each other for contribution, defense, and indemnification.

All of the above is standard fare and occurs almost reflexively. But then something unusual happens: O's counsel files an arbitration demand, demanding that ‎GC arbitrate the issue of whether GC owes O defense and indemnification in the Lawsuit (the "Arbitration"). Inter-defendant arbitration of an indemnity obligation in the context of a pending personal injury lawsuit is an unusual tactic, and raises a host of procedural problems. For example, what happens to the rest of the case as the arbitration proceeds? What if the arbitration requires the resolution of other issues that have not yet been decided by the court? What if the arbitration takes the case beyond “standards and goals”? New York courts have come up with methods of dealing with the procedural problems. See, e.g., Weiss v Nath, 97 A.D.3d 661, 664 (2d Dep't 2012); County Glass & Metal Installers, Inc. v. Pavarini McGovern, LLC, 65 A.D.3d 940, 940-941 (1st Dep't 2009); and 624 Art Holdings, LLC v. Berry-Hill Galleries, Inc., 2012 N.Y. Misc. LEXIS 6440, 26-27 (N.Y. Sup. Ct. June 7, 2012). But even assuming counsel is willing to navigate the attendant procedural problems, in our opinion inter-defendant Arbitration of part of a Supreme Court action can only be justified in one of two circumstances:

1. If the rules applicable to the Arbitration (but not applicable to the Lawsuit) generate a better result -- of course then Arbitration would be advisable. But to make this decision counsel must retrieve the applicable Arbitration rules, review them for application to the indemnity issue, and compare the result with that obtained via the Lawsuit.
2. If the particular arbitrator used comes from a construction background and therefore knows or “feels” that such indemnity obligations should regularly be enforced -- here too Arbitration would be advisable.

So the conclusions are these: If the Arbitration would yield a more favorable result, choose inter-defendant arbitration regardless of the fees for arbitration. If the arbitration would yield a quicker result, and a result no worse than that yielded in Supreme Court, choose to arbitrate if you are willing to pay the cost to arbitrate in exchange for a speedier decision. In all other cases, bide your time and wait for the assigned Justice to make the decision on summary judgment.

Permalink
Gartner + Bloom is pleased to support the Washington Heights and Inwood Development Corp (WHIDC.org), which holds the annual Medieval Festival at Fort Tryon Park on Sunday, September 28, 2014 from 11:30 am to 6pm.

The festival is a unique chance to experience the Medieval period in the most authentic setting this side of the Atlantic.  The area around the Cloisters Museum in Fort Tryon Park is transformed into a medieval market village where knights in armor, jugglers, jesters, magicians, musicians, storytellers, and puppeteers will perform.  A blacksmith, manuscript illuminator, pottery decorator, wood carver and other artisans will demonstrate their crafts.  Performers and fairgoers dress in historical costumes.  Medieval food is available and craft items will be sold.

The afternoon culminates with a jousting event between knights on horseback! Yes, they do knock each other off their horses!
Admission is free. This annual event is sponsored by the City of New York Parks and Recreation and the WHIDC.
We hope to see everyone there! 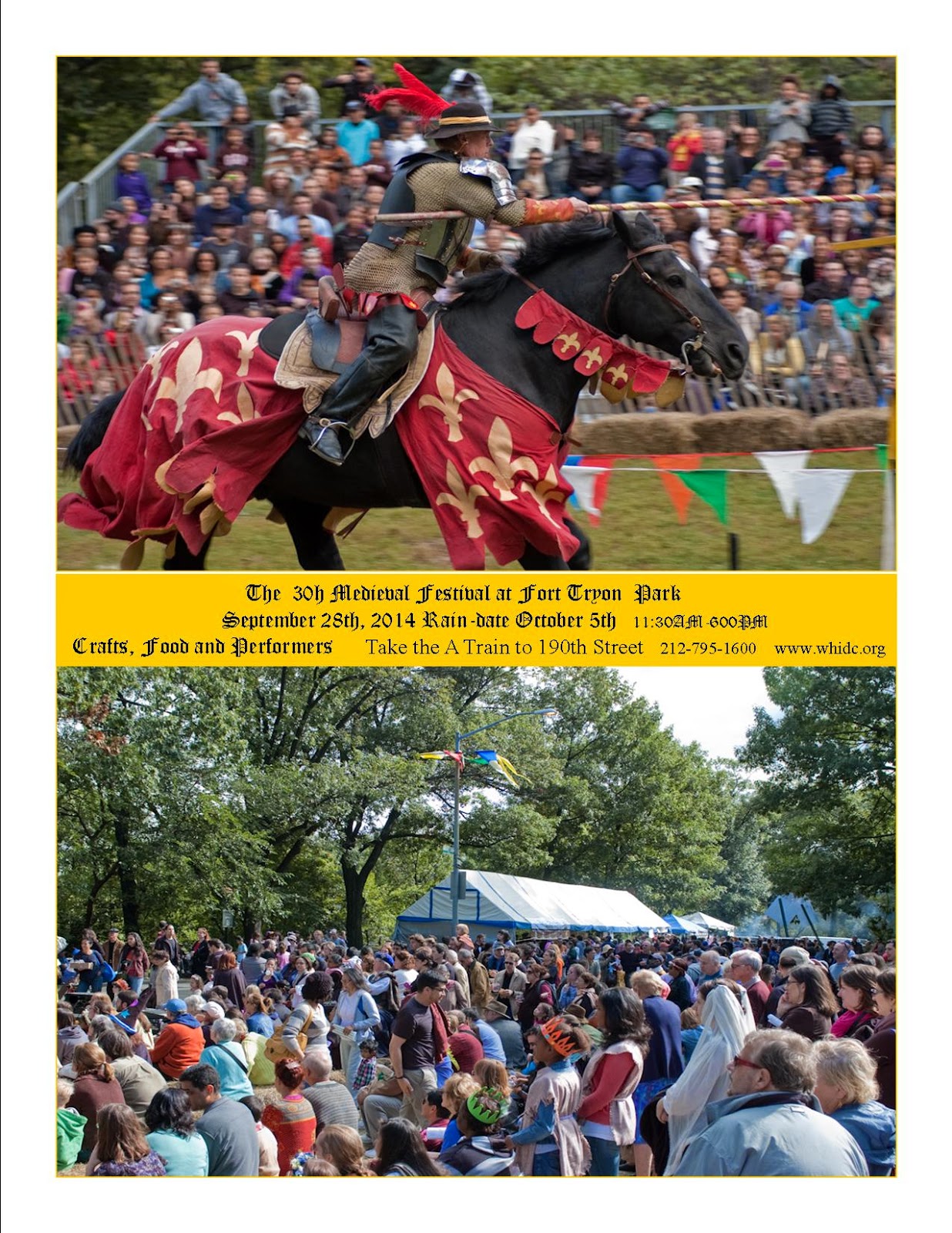 Noises Off, by Arthur Xanthos

Co-ops are landlords, so by law they are deemed to have warranted to tenants that the premises are habitable. An unreasonably loud building obviously can make an apartment uninhabitable. But what if the ‘noise’ complained of is caused by another shareholder-tenant? Further, what if the noise is sporadic, or difficult to record or measure objectively? Such cases pose nettlesome problems for co-ops, managing agents, and their carriers, because money damages are often not the primary goal of the plaintiff. How do you resolve a claim where the plaintiff wants peace and quiet, the defendant-tenant argues that the noise is the natural by-product of a happy, busy family life, and the Co-op cannot control the noise or the plaintiff’s reaction to it?

In our practice, we have seen or suggested several, non-orthodox settlement possibilities: (1) The Co-op can pass and enforce more stringent carpeting and padding rules; (2) Subject to cost, the Co-op can invest in soundproofing materials at the ceiling, floor, or wall interfaces; (3) The parties can explore an apartment swap, or a buyout/sale; (4) The Co-op can monitor noise (via a property manager or superintendent) and assess reasonable fines based on violations of a well-defined noise policy; and (5) If warranted and authorized under the proprietary lease, the Co-op can attempt a dispossess proceeding based on the offending tenant creating a nuisance. See, e.g., Domen v. Aranovich, 1 N.Y.3d 117 (2003). Failing resolution, a strong summary judgment motion on behalf of the Co-op is imperative, keeping in mind that as recently as a few days ago the First Department kept a Co-op in a lawsuit while dismissing the offending, noisy tenant from the case! Brown v Blennerhasset Corp., 2014 N.Y. App. Div. LEXIS 188, 1-3 (1st Dept. Jan. 14, 2014).